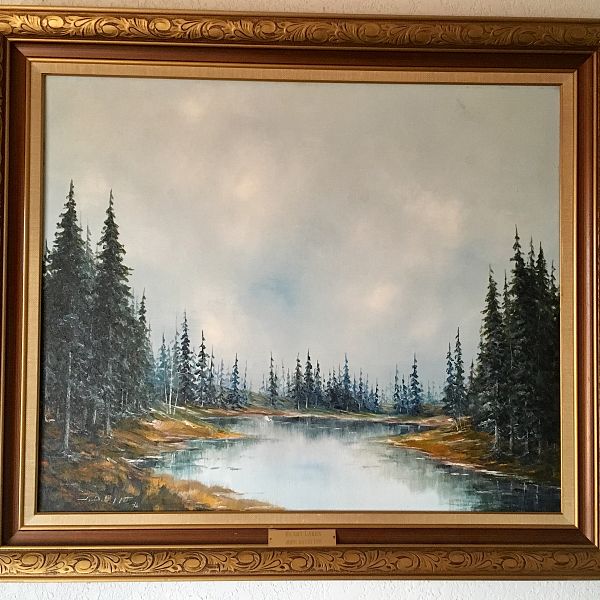 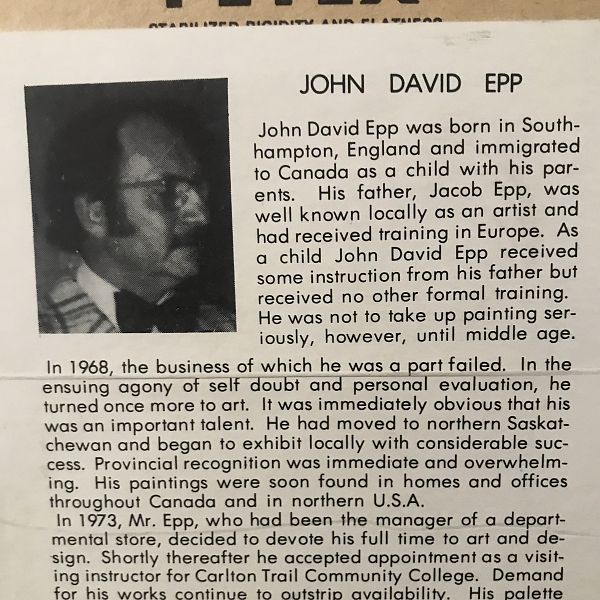 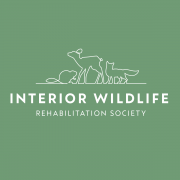 About the artist: John David Epp was born in Southhampton, England in 1923 and immigrated to Canada as a child with his parents. Having lived most of his live in Central Saskatchewan, he has made his home in Melfort since 1967. His father, Jacob Epp, was well known locally as an artist who had received training in Europe. John David’s parents raised their children in a culturally rich environment, instilling in them a love of art and music.

As a child, John David Epp received some instruction from his father but received no other formal training. Recognition that he was gifted came early in his school years, but it wasn’t until later in life that he pursued this talent.

In 1968, the business of which he was a part failed. In the ensuing agony of self-doubt and personal evaluation, he turned once more to art. It was immediately obvious that his was an important talent. He had moved to northern Saskatchewan and began to exhibit locally with considerable success. Provincial recognition was immediate and overwhelming. His paintings were soon found in homes and offices throughout Canada and in northern U.S.A. In 1973, Mr. Epp, who had been the manager of a department store, decided to devote his full time to art and design. Shortly thereafter he accepted appointment as a visiting instructor for Carlton Trail Community College.

Demand for his works continues to outstrip availability. He developed and employs a unique palette knife technique. He considers art simply as a form of self-expression; using colour and design. His abstracts and modern works reflect the drama he feels about his subjects, while other paintings capture the surroundings and memories of his youth, spent as a “barefoot boy on the prairies.”

Two of Epp’s paintings are now part of the permanent collection at Saskatchewan House in London, England. John David Epp is a valued and respected Canadian artist. The distinctive style, rich colours, and vibrant tones make “owning an Epp” both satisfying and rewarding.

Additional Information:
Item is located in Kelowna, BC and can be picked up in-person. Alternatively, the winning bid is responsible for mailing costs.

Please login or register to bid on this item.

Bidding on this item is now closed. 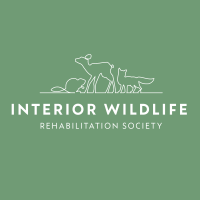 Back to all products »


Some Other Auction Items